Skyline Trapeze, Dallas’ first trapeze rig, was born out of a desire to bring an aerial training center to one of the largest untapped cities in the country!  While Donovan was in Austin training, he was amazed by the number of people who commuted from both Houston and Dallas in order to take part in flying trapeze.  As one of the largest metro areas in the country, it seems only fitting that Dallas have its own flying trapeze school and training center.  As we expanded to our new indoor facility, we decided it was time to rebrand to Dallas Circus Center.  We now offer the only flying trapeze rig open to the public in the DFW area, along with all forms of aerial circus arts. 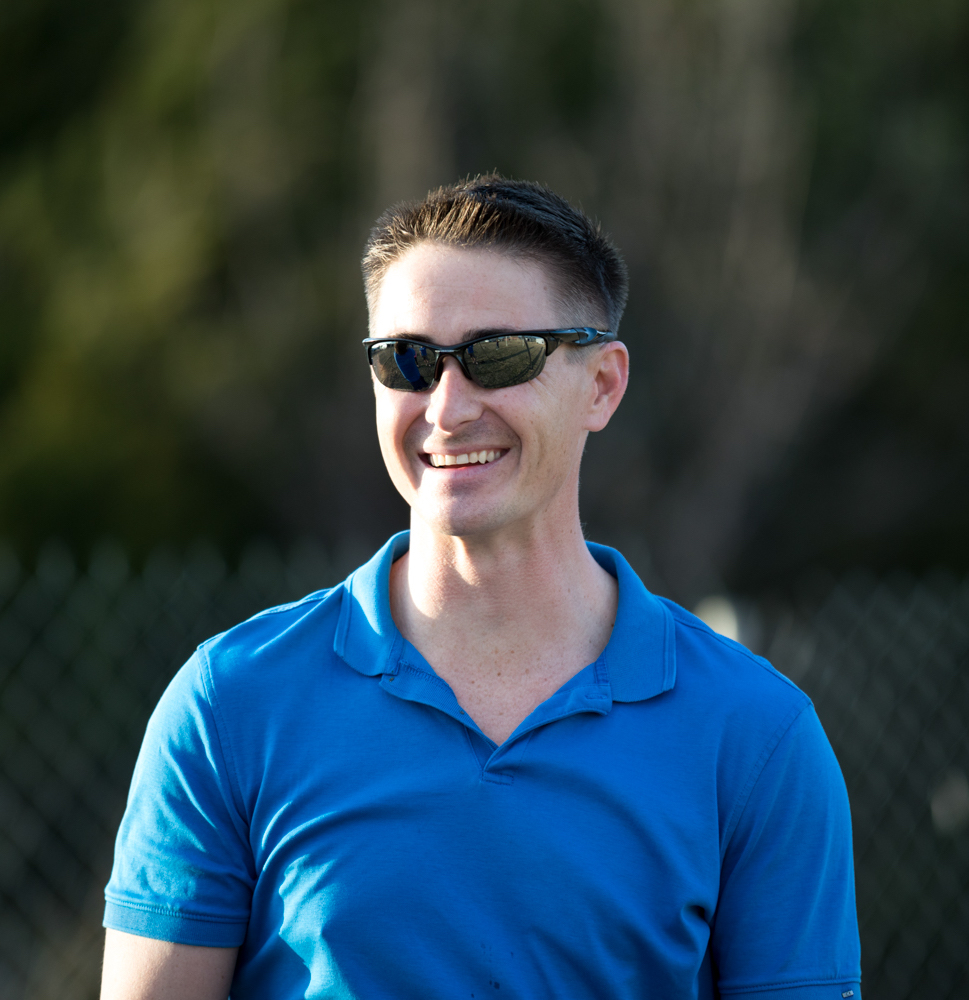 As a physics major at the Naval Academy in Annapolis, MD, Donovan specialized in bio-mechanical physics – the physics of a body’s motion.  This was the best way for him to merge a joy of physics with an intrigue into the musculoskeletal system, and a pure love for gymnastics.  He learned how the body functioned in physiology class, how to manipulate gravity in physics class, and ended his day with gymnastics team practice, putting things in motion.  After the Naval Academy, he spent some time at the University of Nevada, Las Vegas, where he learned overhead partner balancing on the cheerleading team.  From there, he left college athletics to pursue a career in construction and engineering with a specialization in underground tunnels, while also keeping active by teaching higher-level gymnastics teams across the country.  It didn’t take long before this lifestyle landed him on a tunnel project in Washington, D.C.  Within the first year, an old friend invited him to a flying class.  Little did he know he would begin friendships that would last a lifetime. After a year of working for TSNY DC he took a long-term sabbatical from tunneling to pursue a performing career.  Spending the next year touring the country training and performing with various groups, it became clear that, while performing was amazing, there was more that he could offer.  It seemed like there was no better time than the present to open a training facility in Dallas where he and others could share some of the knowledge and love of human activity to anyone interested in learning to fly. 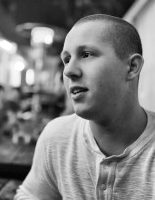 Mike moved to Addison in 2014 as a career stepping stone in Facilities Management.  He discovered flying trapeze because of his sport rock climbing community at the beginning of our 2015 season and quickly fell in love.  He became one of our best lines pullers and even stepped up as General Manager during our 2016 season.  While he has since devoted his attention back to his Facilities Management career (after receiving a significant promotion that requires FAR more hours) he still picks up the occasional trapeze class.  Consider yourself lucky if you get to have him teaching one of your classes!

Mackenzie was working as an engineer for a renewable energy start-up when she took her first recreational flying trapeze class and fell in love with it! The exhilaration and freedom of flying combined with the physical and mental challenge of learning new tricks had her hooked from the start. Mackenzie graduated from the Hockaday School in Dallas, received her B.S. in Engineering from Harvey Mudd College in Claremont, CA and has worked in breadth of industries, from pharmaceuticals to biofuels. As luck may have it, a temporary engineering assignment brought her back to Dallas where she could enjoy flying trapeze full-time!  When that project ended she decided to take a break from the traditional career path and pursue her newfound love.  She has been with us since 2015.

Scott has been a performing acrobat his entire career.  He has performed in many places including Disney World (Lion King show at Animal Kingdom), Hollywood (Movie – Step Up 4), and most recently, Royal Caribbean Cruise Lines.  Scott was a dance captain on the worlds largest cruise ship when he discovered flying trapeze.  For several years he taught flying trapeze during his performance breaks, but with Covid, Scott has retired to land and joined our team full-time.  He is still teaching gymnastics and cheer programs throughout the area and has added significant skill sets towards broadening our team. 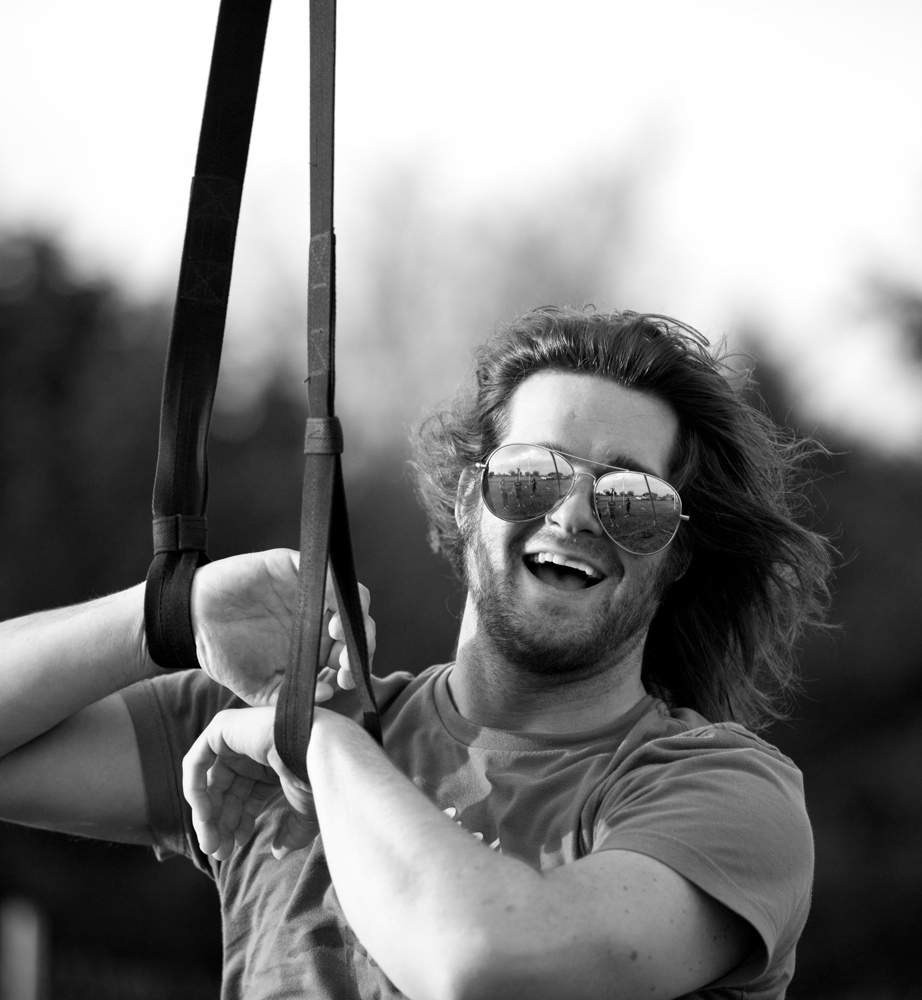 Bill has almost 20 years of experience as a professional skydiver.  He holds several world records for big-way skydives.  While he has largely retired from both skydiving and trapeze, we keep him a part of the team because his personality is large enough to fill the tent when he blesses us with his presence! 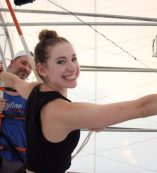 A native of Frisco, Texas, Shayna graduated from Independence High School and Texas A&M University where she is a never-ending, professional student – currently studying at NYU Tish School of the Arts. As a dancer for the past 20 years, Shayna has performed numerous times around the country and continues to choreograph for various performances around the state. She started trapeze when her little sister bet her she wouldn’t try it in Florida one summer – so she obviously had to – and fell in love with it!  We keep hoping one day she’ll decide she has enough degrees and will move back to Dallas so we can see her more often. 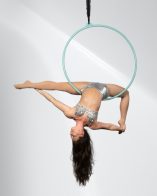 Originally from Illinois and currently based in Texas, Ashlyn has spent most of her young adult life in the dance world. She spent 3 years as a student at Peoria Ballet Company performing in a variety of full length ballets such as The Nutcracker, Cinderella, and many more. She then went on to obtain her Bachelor of Arts in Dance performance in just 3 years from Webster University, graduating Magna Cum Laude and with a minor in management. At Webster, she was introduced to aerial arts and trained under Monica Newsam. Ashlyn has experience teaching and performing on silks, lyra, static trapeze, and aerial cube. She is also featured in the single point trapeze technique & syllabus book, “Aerial Dance for Dancers” by Monica Newsam. Ashlyn performs regularly around the area and is currently the resident aerialist at XOXO dining room for their Saturday and Sunday brunches. 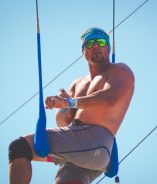 Ryan grew up in Dallas, TX but his acrobat career began in Santa Monica CA, as a flying trapeze student when he was 25 yeas old! After spending long days and months running all over Hollywood shooting TV shows and commercials, it was apparent the physical aspect of circus was more appealing to him. He quickly, but efficiently, learned how to teach, rig and eventually manage the largest flying trapeze school in the world as well as produce their local shows.
Most recently, he has returned from 4 years of catching one of the most versatile and difficult flying acts in the world, in Japan.  His skills are as long as his resume as you may have seen him riding a motorcycle on a high wire as he toured across the US with Ringling Bros. and Barnum & Bailey; performing teeth hang/hair hang with his partner (and wife) in the Vietnam Ha Long Bay Circus Festival (winning audience favorite award), or performing wall acrobatics in Hong Kong.  Mainly as a flying trapeze artist, his main forte, has taken him to over 26 countries and 5 continents in his career!
Ryan’s passion has always been performing and he even earned his Bachelor’s degree in Art Performance while simultaneously producing and performing nightly shows at a Male Revue club. Outside of circus, he has performed in prime time tv sitcoms, full length feature films, national commercials, countless short films and music videos as well as even appearing in Muscle Fitness, Men’s Health and Men’s Fitness as a fitness model.
In his extensive career, he has entertained for millions of people worldwide and performed with and trained some of the best acrobats on the planet!  He has a Youtube channel, ‘RyanS Acrobat’ dedicated to sharing his experiences and cultural learnings from his years touring.